These fig financiers are a version of French almond tea cakes but made with brown butter, bay leaf, extra vanilla and a fresh fig nestled in it!

San Francisco is an oddball when it comes to weather. While the rest of the country is crazy hot in the summertime, we’re cool and foggy…unless we’re in a weird heat wave. Or hazy and smoky with the fire season. But the one things I can count on to help signify the changing of the seasons from summer to fall is the slow disappearance of berries and stonefruit and the appearance of figs! Fresh figs means I can eat them out of hand, putting them in my yogurt and oatmeal as well as make my fig and honey focaccia. But I’ve also been wanting to make brown butter financiers forever, and nestling figs in each of the financier elevates these almond tea cakes to the next level!

A financier is a small French pastry that is made with almond flour, egg whites and brown butter. The traditional financier is baked in a small rectangular loaf, which requires a specialty pan.

Though traditional financiers require this specialty pan, which you can purchase online (

How did financiers get their name?

When baked in their traditional rectangular shape, these tea cakes are similar in appearance to gold bars, which is one theory of where the name financier comes from. Another popular theory they were often sold in the financial district of Paris in the 1800s, where the pricey tea cakes (the ingredients used to make them were expensive at the time) could only be afforded by the financial investors working nearby. And finally one story says that the French enjoy a mid-afternoon snack at the sweet shop, and they needed something that would be easy to eat that wouldn’t be messy, as they were in their work clothes. The financier was the perfect solution!

How do you make a financiers?

Similar to a French madeleine cookies, the financier cake is made by first creating brown butter. I opted to add fresh bay leaves to the butter as I cook it, which gives an elusive autumnal scent to the butter.

To make the bay leaf brown butter, you place the butter and bay leaves in a large skillet, preferably one with a silver bottom. Then slowly cook the butter until it is melted and the milk solids have turned golden brown and smells fragrantly nutty. Discard the leaves and set aside the butter to cool.

Grease a muffin pan with melted butter and preheat the oven. Stir together the almond flour, sugar, flour and salt in a large bowl with a balloon whisk. Then add in the egg whites, folding until absorbed.

Mix in the brown butter and the vanilla then divide the batter into the prepared muffin tin. Nestle in half a fresh fig into each cup of batter and bake until golden brown.

Can I make these financiers in a more traditional manner without the figs and bay leaf?

Yes! This is an excellent base recipe for financiers. Just omit the bay leaf when browning the butter and bake the financiers without the fresh fig.

You might want to reduce the vanilla down to 1 teaspoon or use a mix of 1/2 teaspoon of vanilla and 1/2 teaspoon almond extract for a plain financier. Or keep the full 1 tablespoon for a robust vanilla flavor.

How do you store financiers?

Can I freeze these financiers?

Yes! You can easily freeze these financiers. Just freeze them first on a baking sheet, until frozen solid, about 2 to 3 hours. Then store them in an airtight container or in a ziplock bag. They will keep in the freezer for up to 2 months.

If you like these Fig Financiers, check out these other small individual sized baked goods: 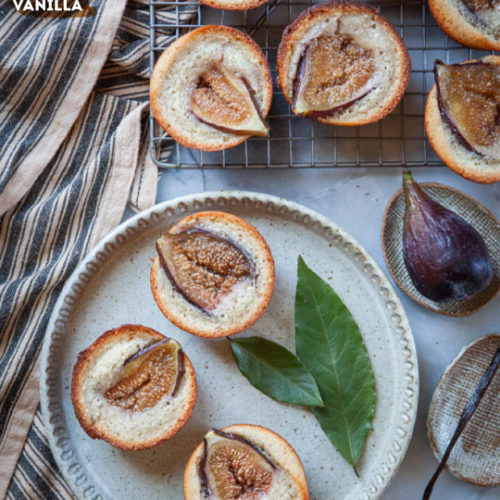 The classic French almond tea cake is given an autumnal twist with fresh bay leaf, a healthy dose of vanilla and a fresh fig nestled into the cake. Bake them until they just golden brown on top. Be sure to brown the butter until the milk solids just start to turn golden brown. Then remove the pan from the heat and let the residual heat darken and brown the butter. If you leave the butter on the heat too long, it will burn and you’ll have to start over.
Course Dessert, Snack
Cuisine American, French
Keyword almond, cake, figs
Prep Time 20 minutes
Cook Time 20 minutes
Cooling time 10 minutes
Servings 12
Calories 197kcal
Author Irvin