When it comes to securing your bike or e-bike against theft, it’s important to first accept the fact that there is no 100% foolproof method. A dedicated thief, with enough time and the right tools, will be able to penetrate just about any lock. With the rise in popularity of e-bikes, riders may be even warier. These bikes are expensive, making them even more valuable targets for theft. Fortunately, you can buy a lot of security by simply investing in the right e-bike locks.

How To Choose The Best E-Bike Lock

When you factor in convenience, cost, and security, the best bike lock for most people will be a U-Lock. U-Locks, also called D-Locks in some regions, are so named for their U-shaped shackle that joins a crossbar. These locks form a “U” when unlocked or a “D” when locked. U-locks are made from hardened steel, making them harder to breach than other kinds of locks. Make sure your U-lock is large enough to accommodate your bike, because e-bikes often have thick frames.

Another option to consider is a chain lock. Chain locks are basically what they sound like: metal chains that you can wrap around your bike and secure with a U-lock or the chain’s integrated locking mechanism. Chain locks are sturdy and hard to break, but they’re heavy and can be hard to carry on the bike. 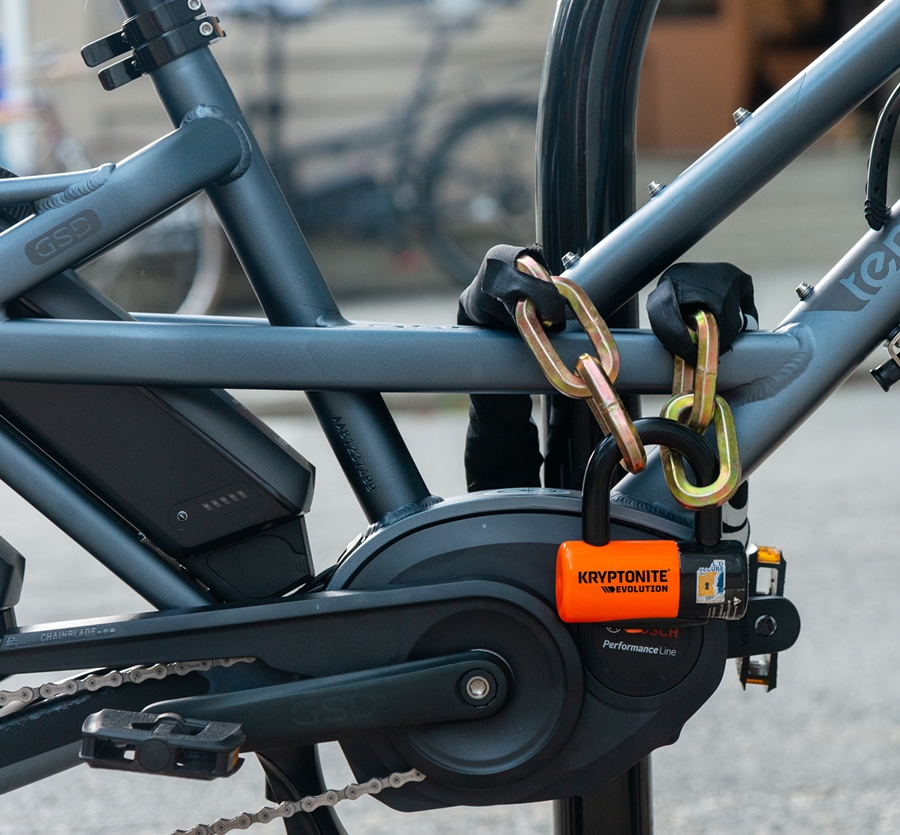 One other option you can consider is a folding lock. Folding locks are highly portable and more flexible than U-Locks and more lightweight than chains. However, they’re generally less secure than either option.

Another type of lock that’s inexpensive and widely available is a cable lock. Cable locks are cheap, flexible and lightweight. The problem with them is that they offer only very minimal security. Most can be breached with only a pair of bolt cutters, or even just handheld cable cutters. Cable locks can come in handy for securing accessories on your bike, like wheels, but they shouldn’t be the primary way you secure your bike.

For E-Bikes: Take Your Battery With You

Our tech editor John Velasco, a regular e-bike rider and commuter, always takes his seat and battery with him when he leaves his bike. Most electric bike batteries can be unlocked and removed with a key. This is to help make it easier to charge the battery without having to lug your bike to a nearby outlet. This also creates the added benefit of being able to remove the most valuable part of your e-bike so that it’s not vulnerable to thieves.

We also talked to David Cogen, who recently shared his bike theft experience on Twitter. Cogen is an e-bike rider who runs a tech blog Youtuber channel that, in an unfortunate twist of irony, is called The Unlockr.

A PSA for anyone who has a nice bike. Here’s the security footage of the guy who stole mine in broad daylight and how he did it 🤬

The thief hid what he was doing and cut through Cogen’s lock, likely by using a portable angle grinder. Cogen has upgraded his lock to a Kryptonite New York Fahgettaboudit with chain, featured on this list. He says “Even with the extra weight of carrying it around, it not only would take someone longer to get through, for sure, it even comes with an insurance policy that if it’s cut the lock manufacturer will cover the cost of the bike up to $5,000.”

Like pretty much every other lock, the Fahgettaboudit lock can be broken with an angle grinder, but the more time and effort a thief has to put in, especially when you add a chain, the more likely they are to look elsewhere.

Unfortunately, even if you have your bike indoors, it can still get stolen. I personally know of two people, both who live in apartments, who had their bikes stolen from the laundry room and parking garage. Even if you’re locking your bike inside your building, it’s best to continue to use a secure lock.

It’s also worth noting that, even with a secure lock, your bike can be stolen with a portable angle grinder. Portable power tools have made it easier for contractors to do their job, but it’s also made it easier for thieves to do theirs. The simple fact is that an angle grinder will breach most of the locks on this list. You can make it as hard as possible for a thief to steal your bike, but you can’t make it impossible.

Very few stolen bikes are recovered, in part because the police largely don’t take bike theft seriously. But you can at the very least upgrade your chances of recovery from “zero” to “very slim” by registering your bike, so there’s at least a record of it. Another option is to register your bike with a third party, such as Kryptonite. Kryptonite has an Anti-Theft Protection Offer, but there are important terms and conditions such as proof of the failed lock.

We also reached out to William Li, co-founder and general manager of e-bike brand Heybike, who suggested “You can file a police report and register your bike on your local government site as well as different online communities such as bikeindex.org and 529garage. I would also recommend looking for the bike at local bike shops and online re-sale sites such as Craigslist or offerupnow.com, to see if it is listed for sale.”

If bike theft is a major problem in your area, as it is in many big cities like New York and Los Angeles, then you may be able to invest in e-bike insurance without spending too much money. Sure, most renter’s and homeowner’s insurance plans don’t cover e-bike theft or damage, but a growing number of them do. For instance, the popular DTC insurance company Lemonade now covers certain classes of pedal-assist e-bikes with their standard policies.

Head to Lemonade to learn more about purchasing a plan that covers ebike theft. There are also insurance companies like Sundays Insurance that specialize in covering bicycles and e-bikes.

How To Lock Your Bike

The best lock won’t be much good if you don’t use it properly. I once had a bike stolen because, by accident, I didn’t actually lock it around the bike rack. All the thief had to do was walk up and take it away. I practically donated it to them. Now, I always double-check that the lock is actually secured.

If you only have one U-lock, the best way to use it is to lock the rear wheel and the seat tube to a bike rack or secure post. In short, the frame should always be secured, as it’s the most valuable part of the bike. The rear wheel is arguably second, because the drivetrain is attached to it. The less room you leave between your lock, the frame and the post, the better. This reduces the amount of leverage a thief can get to work with their tools. 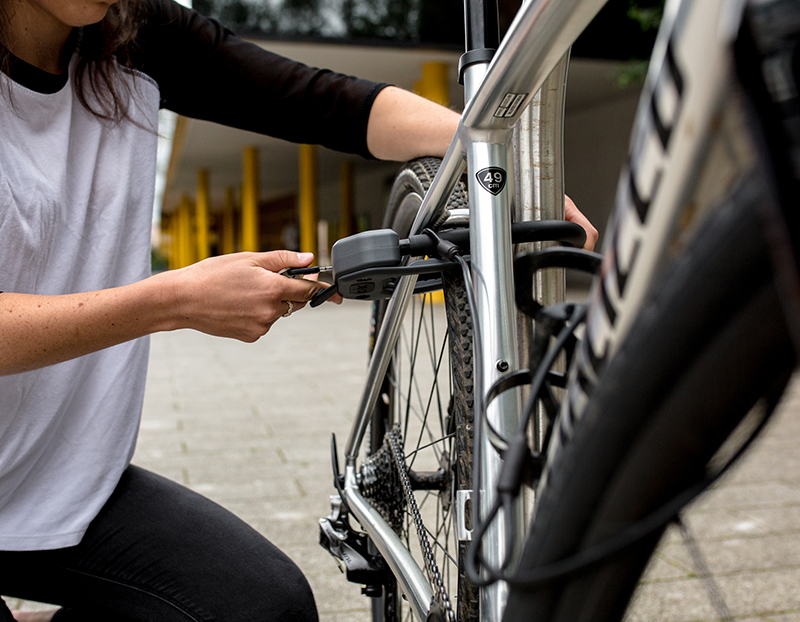 William Li of Heybike suggested using “U locks, chains, and a combination of locks. It’s important to be mindful of the location where the bike is parked. I’d recommend taking your bike inside if you can and putting some old bags or clothes over the battery, which is the more valuable part of the bike. Also, consider having a GPS tracking device and using its mobile app to set up an alarm.”

The most important tip to remember is that you should never lock just the wheel. A wheel can be easily removed, meaning a thief can make off with most of your bike without even having to break anything. You should also consider how long you’re going to be away from your bike. If you’re going to leave your bike somewhere overnight, it’s best to find somewhere inside where you can leave it.

And if you’re going to be away from your bike for a while, consider securing other parts of your bike, or better yet, taking them with you.

This bike lock is available in a more compact package (called the Fahgettaboudit) but it may be hard to use on a large e-bike frame given its small size. This is the larger option, 16mm shackle is designed to resist cutting, and the double deadbolts means the shackle is secure from both ends. Kryptonite also offers anti-theft insurance, which covers theft from a failure of the lock. 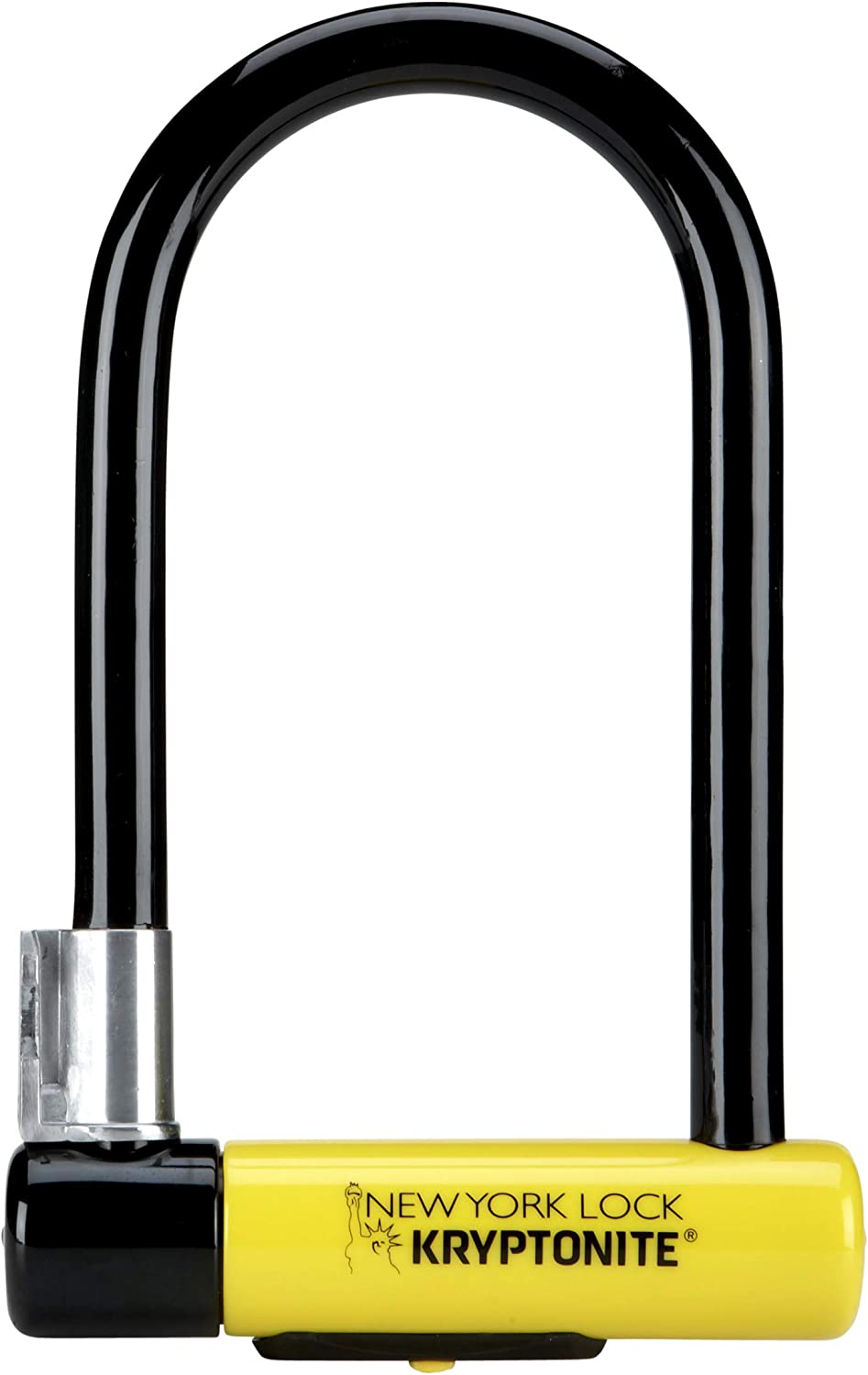 The Fahgettaboudit lock itself is small but heavy, making it potentially hard to maneuver around a larger e-bike. Combined with a chain, however, it becomes easier to lock more parts of your bike. It’s very heavy, but if you’re bringing it with you an en e-bike, it’ll be easier to carry without weighing you down. This is the lock that David Cogen of @theunlockr bought after his last one was cut. 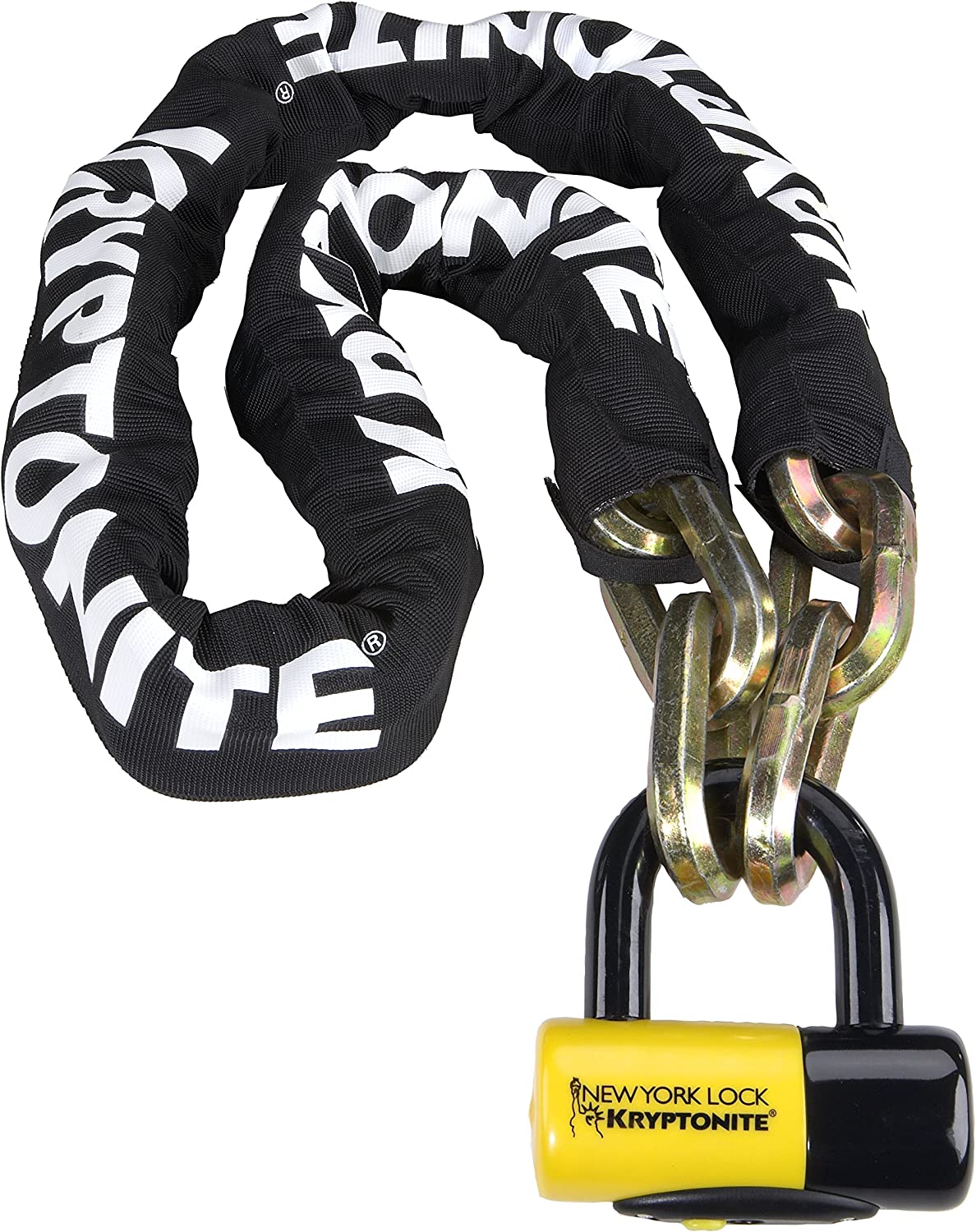 Hiplok’s DX U-Lock was awarded diamond by Sold Secure, a British testing firm that focuses on locks and security devices. Beyond its security, it also offers the benefit of a clip that you can attach to your belt or backpack for easy portability. 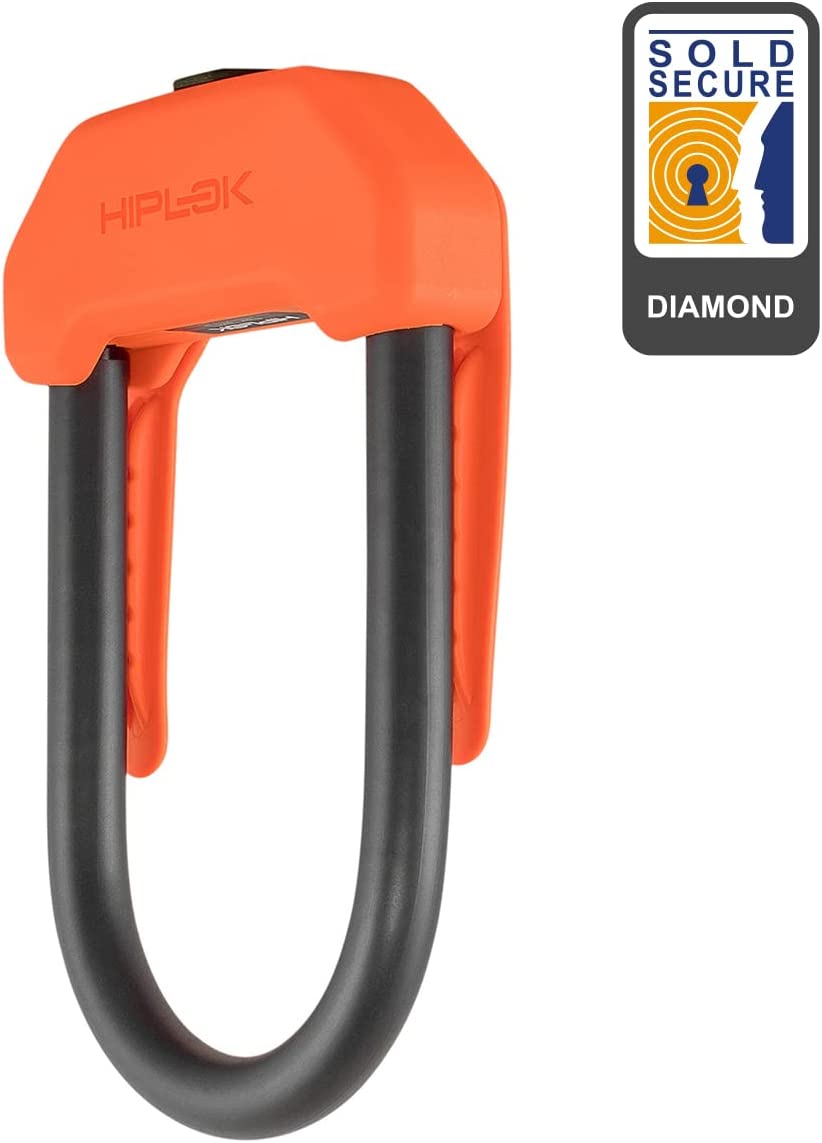 Kryptonite’s Evolution lock is a step down in security (and price) from the New York, but it’s also more lightweight. It’s rated 8/10 on Kryptonite’s security scale. Three keys are included, including one with an LED fob for easy access at night. The double deadbolt design helps resist twist attacks. 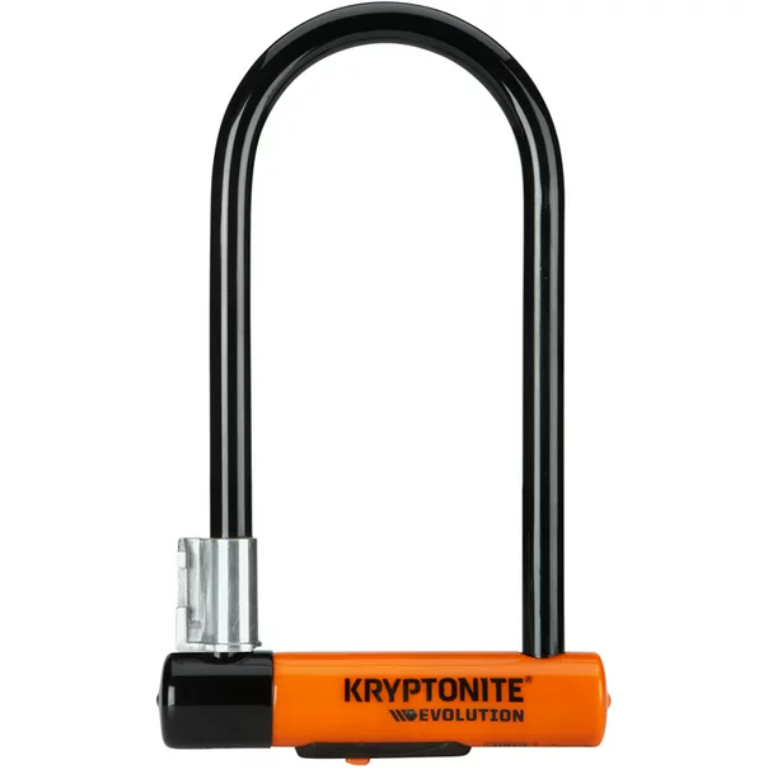 ABUS’ Granit X offers nearly comparable security to Kryptonite’s New York lock, in a more sleek and lightweight package. It’s slimmed down, too. The shackle is 13mm, but its square shape is designed to resist attacks despite its thinner diameter. Two keys are included. 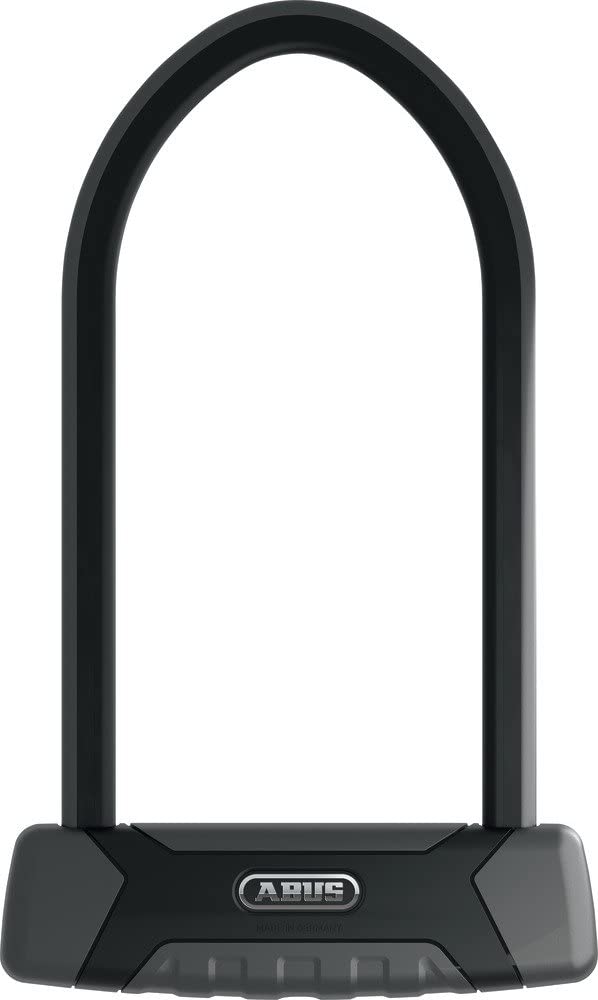 Altor’s Saf Lock is cartoonishly large, impossibly heavy, and wildly expensive. But it can withstand an angle grinder for much longer than any other lock. If you’re willing to completely sacrifice convenience for the sake of security, then consider Altor’s SAF Lock. 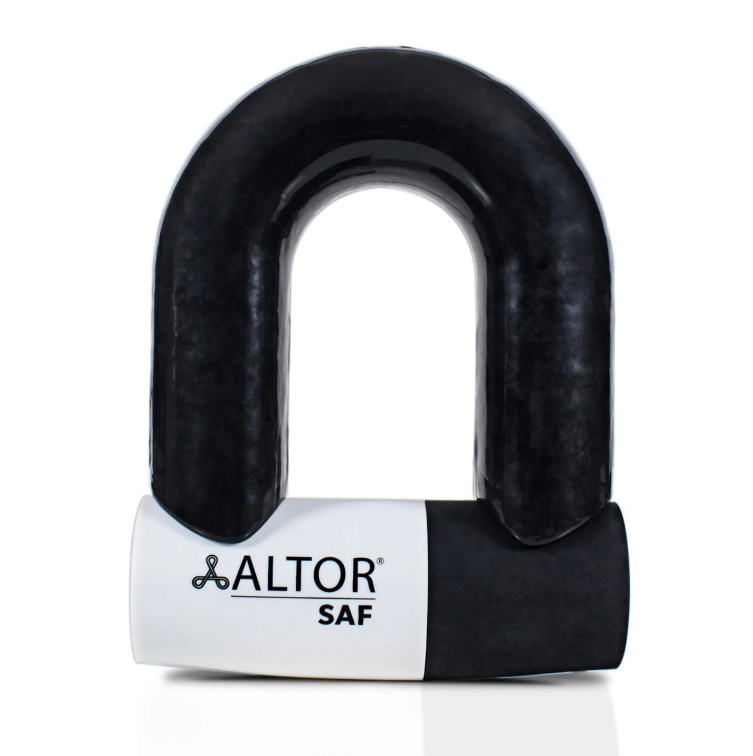 In addition to locks, you can add extra accessories to help make your bike components more secure, so your bike is more likely to be in one piece when you come back to it. Plus, there are accessories that you can use to help retrieve your bike.

As we mentioned, a cable alone should not be relied on to secure your bike. But it is a good option for accessories. You can attach this to your U-lock’s shackle, and loop it through your front wheel. That way, a thief won’t be able to remove the front wheel without tools. 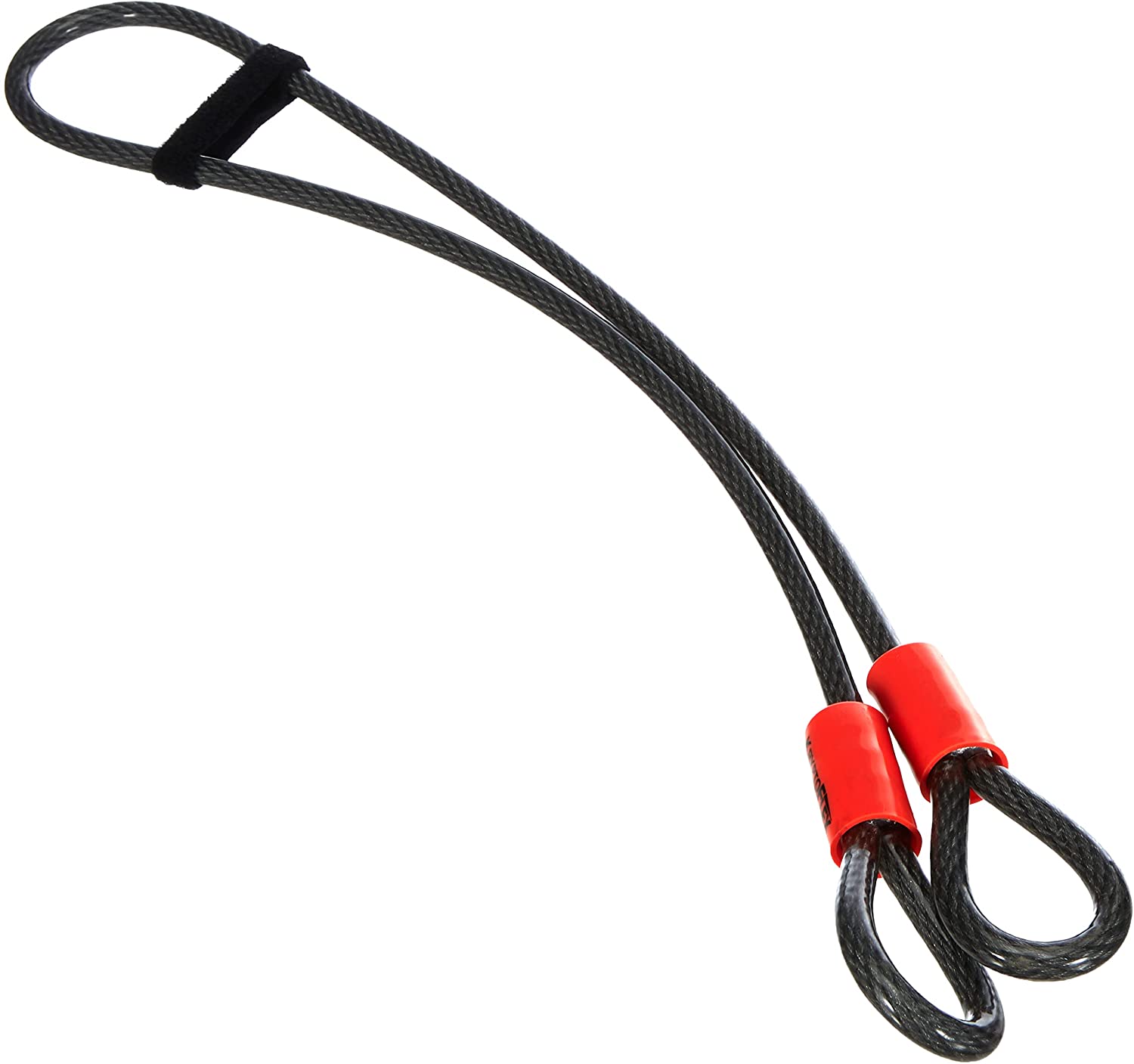 Believe it or not, you can use an AirTag to potentially locate a stolen bike. If you hide it well enough on your bike, a thief may not notice it. AirTags can be found even when they’re not nearby because they anonymously send Bluetooth signals to nearby Apple devices. However, Apple rolled out new features to prevent stalking, which is a noble goal, but one that makes it more likely that a thief will be alerted to the AirTag’s presence. If you do locate your bike, we discourage attempting to intervene yourself, and instead encourage contacting the appropriate authorities.

Like Apple’s AirTag, Tile can be used to track your bike, even if it’s not within Bluetooth range. That’s because it uses Bluetooth connections with other Tile users to help locate missing items. It’s small, discreet and black, so you can more easily hide it on your bicycle. Of course, it only works in densely populated areas, but those are the areas where most bike thefts occur. 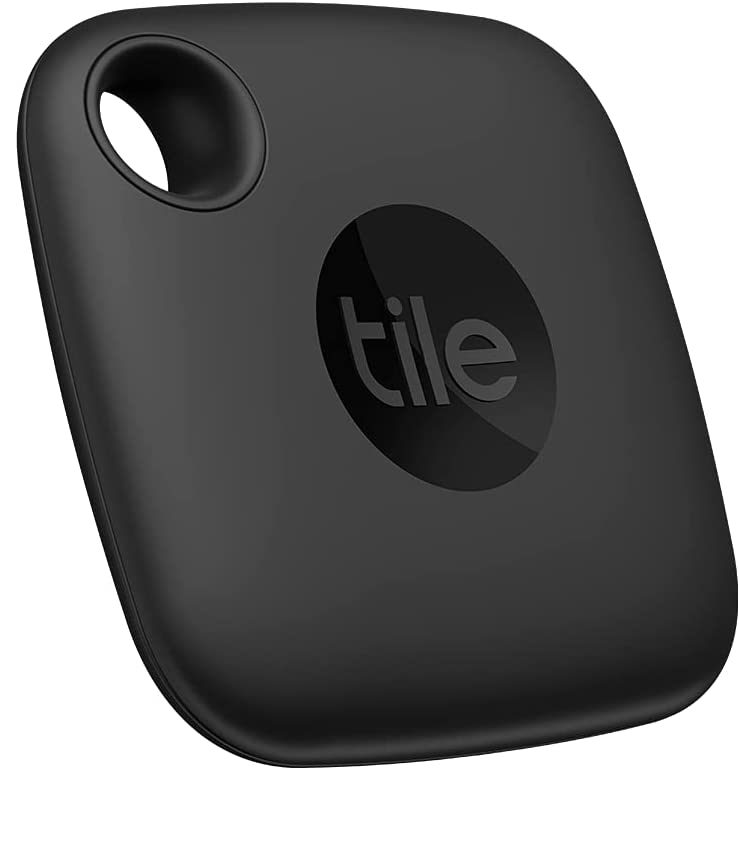 This chain does not have a lock, but it can be used in conjunction with a heavy-duty U-Lock for additional security. It has a gold rating from Sold Secure. 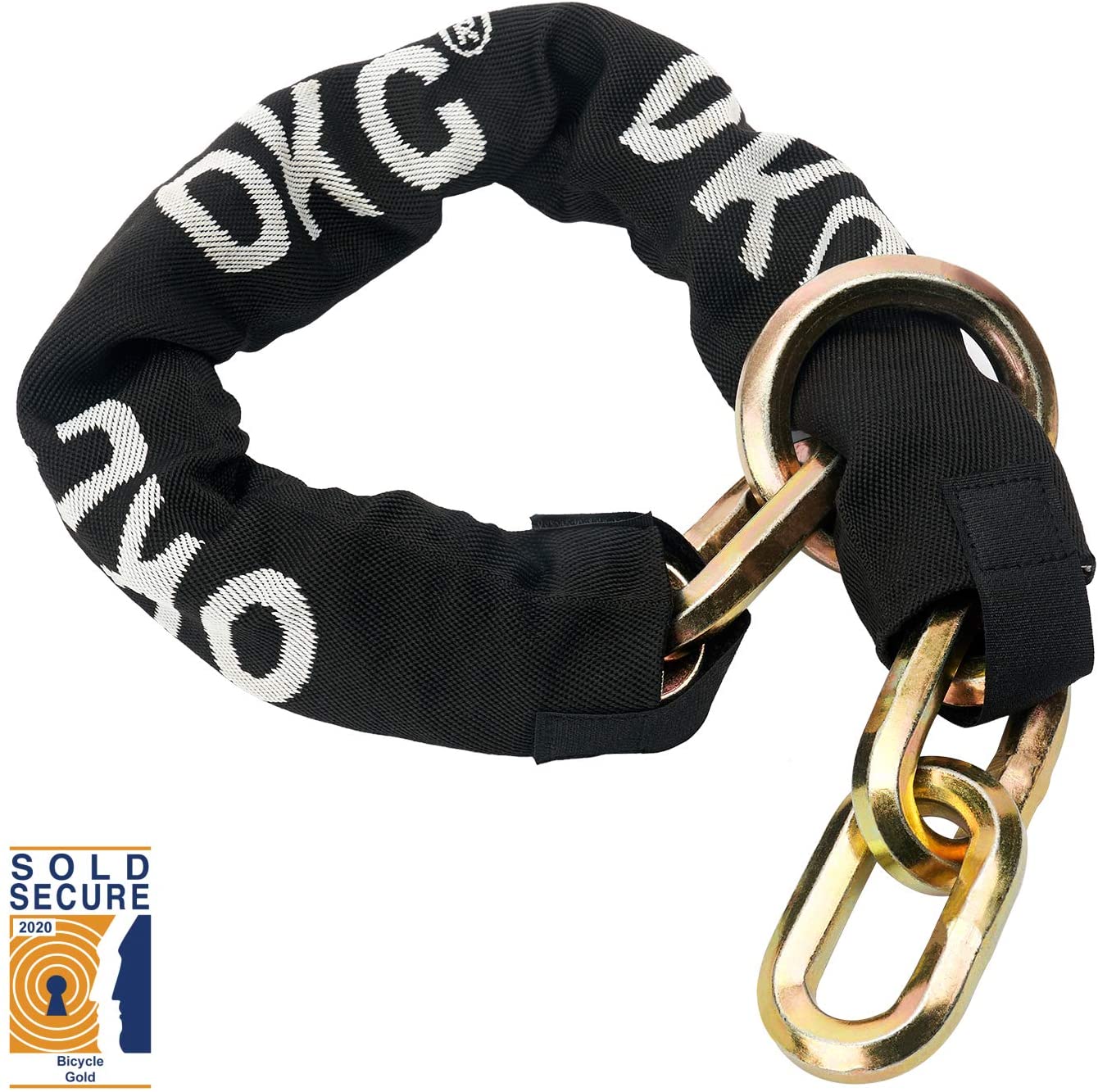 I Ride 40 Miles on a Road Bike Every Weekend, Here Are the Biking Accessories I Always Take With Me