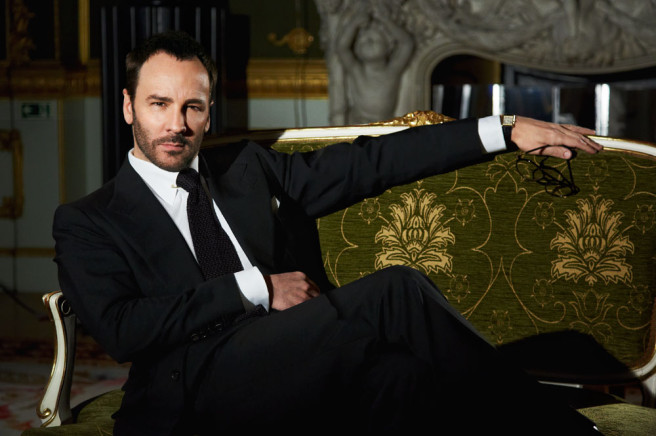 Tom Ford | Photo: Simon Perry
LONDON, United Kingdom — It was not long before Ford jumped back into the fashion mix, but surprising observers again, he started with menswear.
“[Menswear] is a detail-driven business. It really is about the fabrics, or the make, or the buttonholes, or the lapels. At the designer level, it is a very, very different business than women’s,” he says. “So I thought ‘OK, I am ready to go back to fashion,’ and this is a kindler, gentler way to do it.”
But unlike the easier price points of his fragrance and eyewear collections, the menswear offering was decidedly expensive, with off-the-rack suits retailing at over $5,000, about the same price as a bespoke suit from Savile Row.
“One of the reasons that a designer is successful is [because of] intuition. Everything I have done has been quite organic,” insists Ford. “Maybe it would sound better if I sat here and told you it was all a pre-mapped strategy and maybe in my subconscious it was, but it wasn’t. It was organic.”
Nonetheless, Ford’s entry into the menswear market was very well-timed indeed. After a short, sharp fall in luxury spending following the financial crisis of 2008, it was not long before the kind of ultra-high net worth men Ford was targeting were shopping again, driving a surge of demand in the luxury menswear market, which according to consultants Bain & Company, has been growing at 12-16 percent per year since 2010, even faster than womenswear.
And, like his entrées into beauty and eyewear, Ford did not try to do everything in house. Instead, he tapped a longstanding relationship — this time with Gildo Zegna, chief executive of Ermenegildo Zegna — to get a quick start.
“Zegna has built an entire business just on menswear. It can be a very profitable business,” he says. “I could have started with my own office, and I know all the factories and I could go to this factory to get my jacket and that factory to get my shirts, but I needed to go fast. I had worked with Zegna [on] both Gucci and YSL, and Zegna was the only partner which had the ability to make everything from suits, shirts, ties, sportswear, all of it, all at once.”
So, Ford inked yet another deal and soon, he was back in the thick of the ready-to-wear fashion business. As with every business line, he maintains significant control to ensure he gets the results he desires.
“We develop all of our own fabrics. That’s very important for our customer. They don’t want to come to us and spend $5,000 on a men’s suit and see that exact same fabric in someone else’s line,” he explains. “And we control our distribution. They handle the manufacturing and the shipping. It’s our showroom, and our staff, our merchandising team, and we decide where we are sold.”
BUILDING A RETAIL NETWORK
But selling was another challenge altogether.
“The main challenge in starting your own company is [creating] a distribution network — especially when you’re starting a luxury business,” says Ford. And whereas other brands may have chosen to begin by wholesaling their ready-to-wear collections in department stores and boutiques, Ford decided not to go down that route at first. To coincide with the menswear launch, Ford realised he needed his own retail presence, and fast.
“I wanted the very first store to be in London,” he recalls. “I needed to be either on Bond Street or Sloane Street and there [were] no properties available. When anything would come up, I’d get into a bidding war with LVMH, Richemont or Gucci Group. There was no way I could compete.” 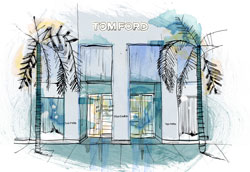